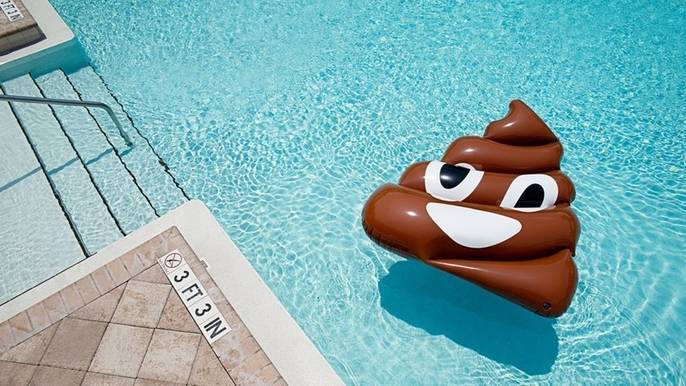 There has seemingly been a growing number of serial public pooping mysteries crapping up across the world. Typically, an innocent community or family is repeatedly victimized by an unknown assailant dropping deuces on front porches, high school football fields, or the washers of a dorm's laundry room.

They acquire fairly creative monikers from journalists and authorities:

Steps are taken to catch the pooper in the act, but they are rarely caught with poop on their hands. Instead, they disappear when they feel the heat, waiting for their victims to let down their guard down so they can strike again.

But why so many serial public poopers now? Are they a growing trend, with brazen perpatrators inspiring copycats, or has our access to viral news stories and social media made us more aware of an already existing phenomenon?

These acts of poop warfare have no doubt become irresistible viral clickbait for media outlets. We can't help but click, read, and share, wondering why someone on their morning jog would feel the irresistible primal desire to poop on someone's front porch.

We'll explore the deranged psychology behind serial public pooping, and recount just three of the most infamous cases — the incidents that make you ask WTF? before busting out laughing. Let's begin with the one they call The Mad Pooper.

Once a week for seven weeks, The Mad Pooper shat on the Budde family's sidewalk, even when confronted by Cathy Budde.

Cathy's kids even caught The Mad Pooper in the act, taking a crap in front of their house one morning. When Cathy confronted the female pooper about taking a dump on their property in front of her kids, the pooper merely said, "Yeah, sorry!" and went about her morning jog. She was also spotted doing the deed at a Walgreens and on other people's property.

Lieutenant Howard Black of the Colorado Springs Police Department said he hadn't seen anything like this in his 35 years in the department.

To no avail, Cathy put a sign on their wall that plead with the pooper, "Please, I'm begging you, please stop."

The Mad Pooper has never been caught by police. Perhaps she sensed there was too much heat in the press for her to drop another hot one on the Budde's driveway.

Our next serial public pooper takes us to Abbott Hall, a dormitory at Southern Illinois University. The perpetrator took Abbott Hall's laundry room as his toilet, giving unsuspecting students a stinky surprise when they opened the washer. In all there were eight confirmed incidents of The Laundry Bomber dumping on students' freshly washed clothes.

One proposed motive for the crimes was to punish people who waited too long to remove their clothes from the washer. Students have reported the first thing that hits them is the smell of poop, then confusion, and finally the shocking discovery of shit in their clean, wet clothes.

There have been no reports of The Laundry Bomber being caught at Southern Illinois — leading students to wonder where the mystery pooper might strike next.

For weeks, employees at Holmdel High School in New Jersey were stymied by the feces appearing on a daily basis on the school football field and track.

One would assume it was an unruly student perpetrating a prank and receiving secret satisfaction from their deeds. Unable to figure out who was doing their morning constitutional on their field, the school set up surveillance cameras to nab the mystery serial pooper.

Those monitoring the surveillance footage must have been shocked when it revealed Kenliworth Public Schools superintendent Thomas Tramaglini was behind the daily football field poops.

There is no specific clinical diagnosis for serial public pooping. We can only speculate as to what is going on with these depraved people.

One could guess there are anger and rage issues with public poopers, who unconsciously feel dumping on other people's property is the ultimate way to discharge it. Or they could be trying to send a message, like The Laundry Bomber, or maybe it's a cry for help.

It could also be what the American Council on Science and Health calls "elimination disorder," which is a real mental disorder whose symptoms include the inappropriate passage of bodily functions — paging Dr. Freud.

At worst, serial poopers can go on for decades, like the phantom pooper who clogged the holes of a Norwegian golf course for a decade.

We should consider ourselves lucky, for when us normals poop in public, it's always on accident and usually comes in the form of a shart, say, in the office.

For Shart Attacks, you always have DUDE Wipes to help you recover and regain your composure. But victims of serial public poopers have to live with the trauma of seeing a random person's poop in their laundry or on their doorstop.

So the next next time a Shart Attack strikes, don't panic or beat yourself up. Be grateful no one shat on your desk before you came into work today and go get fresh with a DUDE Wipe.