Why Toilet Seat Covers Are An Exercise In Futility

In a highly scientific poll conducted by the the brain geniuses at Buzzfeed, it was discovered that over half of the population is using public bathrooms incorrectly. 57% of respondents admitted they either “pop a squat” or put toilet paper over the seat when using a public bathroom.

Let me free you from this nonsense.

To start, your iPhone has 10 times more bacteria than most toilet seats. Think about how many times a day the bathroom at your local Starbucks is cleaned. Now ask yourself when you cleaned your phone last? Thought so.

This doesn’t mean you should start sneaking naps on toilet seats, but by god, don’t be afraid to put your bare butt on it.

There’s no need to overcomplicate going to the bathroom just because you aren’t doing it on your home turf. There are much worse nightmares you can experience in public bathrooms than an uncovered seat.

All you have to do is wash your hands thoroughly after you go to the bathroom — it will protect you from 99.9% of the icky viruses and bacteria you’re afraid of catching. This is because unlike your mouth, the skin on your butt doesn’t a darn good job of protecting you against dangerous bacteria.

In fact, the only way you could possibly get sick from the germs on a toilet seat is if you had an open sore on your ass, and if that’s the case, it’s our professional opinion you should go see a doctor before you do anything else.

And ironically, paper toilet seat covers likely have even more bacteria than the toilet seats we protect our bums from.

There’s something bathroom experts call “toilet plume,” which is the fecal matter/water combo toilets shoot out like a cannon with every flush. This plume can go as far as six feet in the air, covering everything it touches in toilet germs.

What would you rather take your chances with? A toilet that’s cleaned several times a day or a paper seat cover that has been getting doused with fresh fecal matter with every flush? This is also why flushing with the toilet seat down is something you should add to your bathroom repertoire.

And even if you got a clean cover on the seat, those flimsy sheets of paper aren’t exactly Hadrian’s Wall when it comes to protecting your from bacterial invaders. Any bacteria or virus worth its illness will go right through those porous borders.

So why are paper toilet seat covers a thing?

They’re a placebo that gives us the psychological comfort of cleanliness instead of sitting on what we perceive to be a filthy toilet seat.

So remember, toilet seats do not transmit viruses. The next time you poop in a public bathroom forget the toilet seat cover, but remember to courtesy flush. This has been a public toilet announcement from the brain trust of DUDE Products. So spread the gospel far and wide, and get more bare asses on toilets and wipes in hands — we need you out there, DUDE. 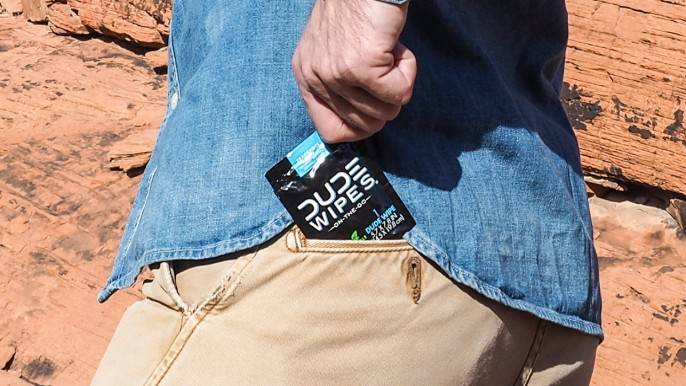