The ‘Stonks’ Meme Is Idiotic and Brilliant at the Same Time

One of the fundamental teachings of behavioral economics is that people often think they're smart with money when, in reality, they have the financial prowess of a lemonade stand attendant.

College professors might think you need textbooks and academic journals to fully explain this phenomenon. But in real life (and by real life, we mean the internet), all you need is a poorly made 3D head, stock photos, and Reddit.

Yes, we're talking about the stonks meme, which is having a resurgence in corona times.

Those of you who are financially illiterate, "stonks" is an intentional misspelling of the word "stocks." The meme began as a reaction image online to mock poor financial decisions. Most recently, it's been used to satirize the new wave of day traders playing the stonk market—or, stock market—like a video game. Except the consequences can be life-altering.

A Brief History of the Stonks Meme

According to Know Your Meme, "stonks" originated June 5, 2017, when the Facebook page Special Meme Fresh posted a pic featuring their signature character "Meme Man" standing in front of a picture depicting the stock market with the caption "stonks."

The image falls into a sub-genre of dank memes known as surreal memes characterized by minimalist design, bizarre appearance, and absurd style.

The stonks image quickly caught traction on 4chan, YouTube, and Reddit, especially on the subreddit /r/Ooer, where it gained nearly 500 points. It was also viewed over 131,000 views in an Imgur photo dump and was famously mashed up by a Redditor with the "I'll Take Your Entire Stock" meme (see below). 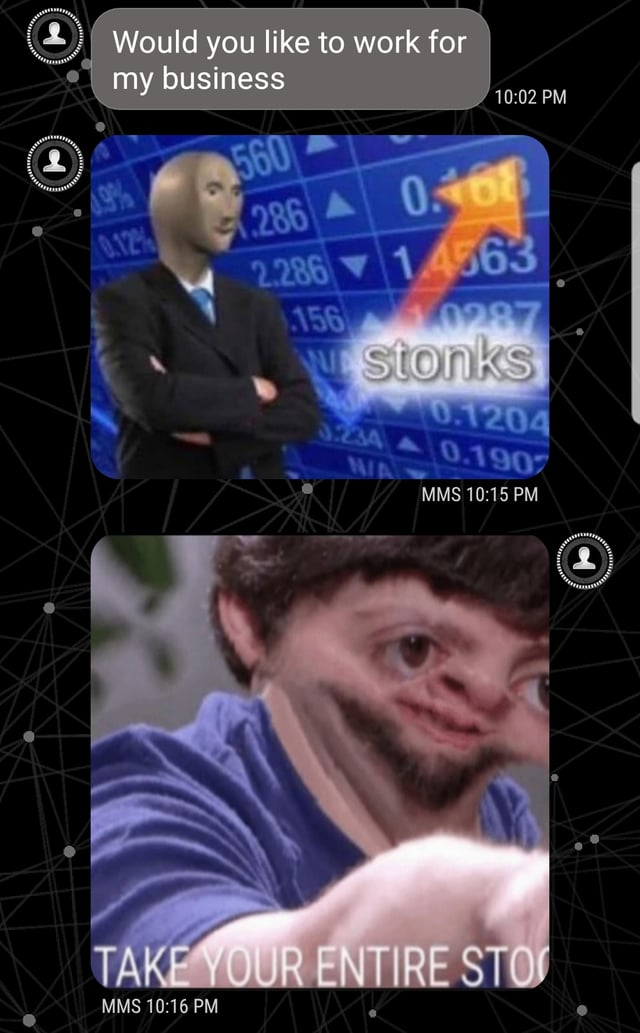 "[Stonks] became an ironic way to pair images with captions where you are actually bad with money but you think you are good with money," says Know Your Meme editor Adam Downer. "You feel like you've gamed the system, but you're actually kind of an idiot."

The stonks meme inevitably evolved into the "not stonks" meme, which uses the same template except Meme Man is frowning, and all of the stock numbers in the background are going down. "Not stonks" is used to express sadness or frustration when things aren't going your way, whether it's the stock market actually going down or when your expired Taco Bell coupon gets rejected. 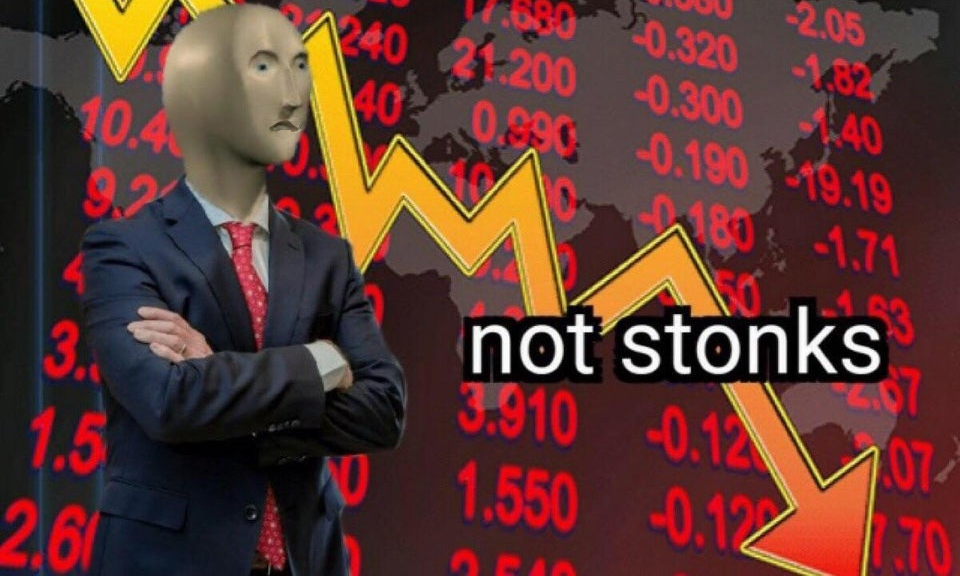 Stonks During the Coronavirus

Since the coronavirus hit in the US, it's estimated that 10 million new investment accounts have been opened, mostly by millennials and Gen-Zers who are bored at home during quarantine. During the first quarter of 2020, the trading app Robinhood added a record three million new users to its platform.

Instead of betting on sports games, people started betting on global capitalism. Leading the charge was Barstool Sports' Dave Portnoy, who deposited $3 million and started trading under the live stream Davey Day Trader Global, or DDTG, which got hundreds of thousands of views. 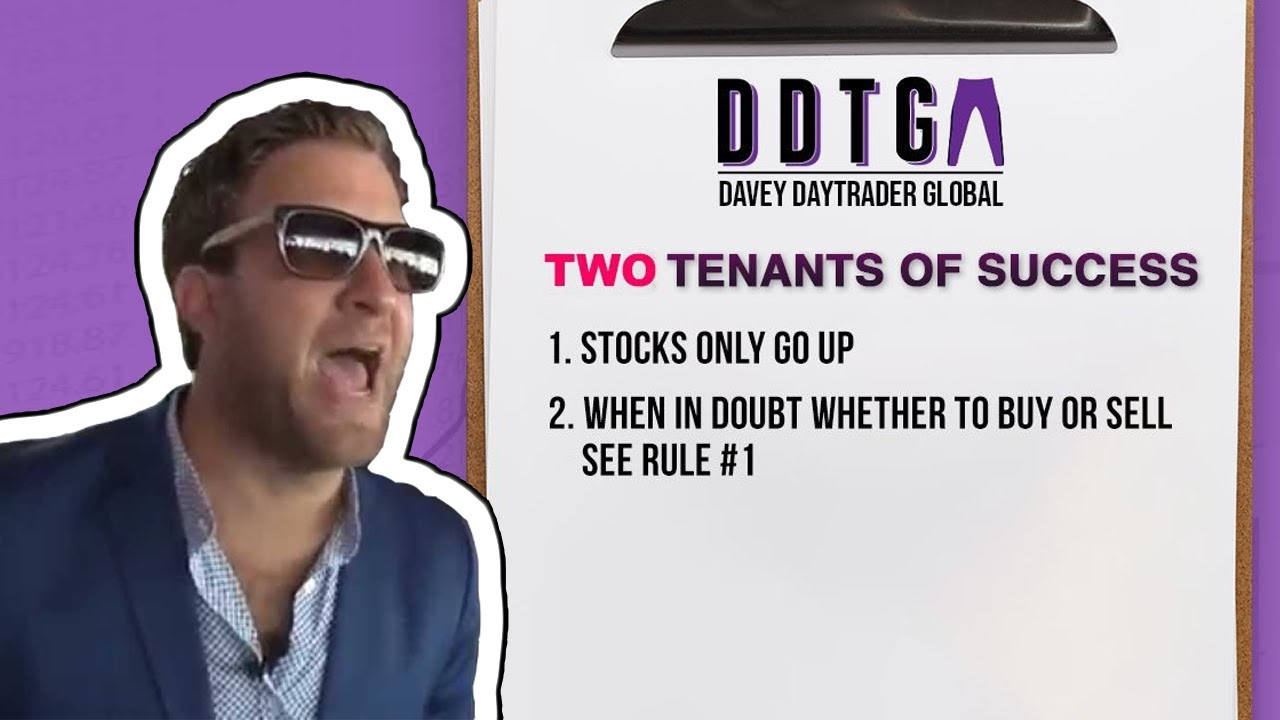 "Stocks only go up, and even when they don't, they do," said El Pres. "Treat the stock market like Monopoly, and you can't lose."

By the end of his first week, El Pres found himself down $700K and was soon banned from E-trade.

As markets began to recover in the summer, Twitter and TikTok flooded with stories of people making big profits in the volatile economy. These so-called Robinhood Bros mocked the "suits" on Wall Street, asserting that anyone can play in stocks. If the stock goes up, great. If it drops 50%, that's even better. It has so much potential. That's stonks, baby.

But for every funny meme, there's a catastrophic failure. Like 31-year-old Richard Dobatse, who funded his Robinhood account by taking out $15,000 in credit and two $30,000 home-equity loans to fund early losses. He turned those loans and credit into $1 million, but within months he was down to $6,000.

Why the Stonks Meme Will Never Die

If there's one thing we can count on these days, it's that people will always do stupid shit with their money. Whether it's taking out a second mortgage to ride the TSLA momentum or spending $10 on a scratch-off to win $5, the stonks meme will be there to speak to our universal feeling of financial incompetence.

Bet On Dude. Every Time.