Is GigaChad Real? Sort Of. – DUDE Products Skip to content

He’s super tall, ultra-shredded, immaculately groomed, and all over the internet.

But is he real?

If you spend enough time on social media, you’ll almost certainly encounter the seductive gaze of GigaChad: an impossibly attractive man with a chiseled jaw, immaculate smile, and Hulk-like physique.

GigaChad has been the basis of countless memes over the past five years. However, as more pictures of this real-life action figure circulate online, internet sleuths have convinced themselves that GigaChad can’t be an actual human being—or can he?

In this article, we’ll explain the origins of the Giga Chad meme, how it took the internet by storm, and whether he’s a real person.

GigaChad is the nickname for a bodybuilder/model who appears in a series of deeply-stylized, black-and-white photographs. He looks like a real-life action figure: square jawline, bulging muscles, and luscious beard. 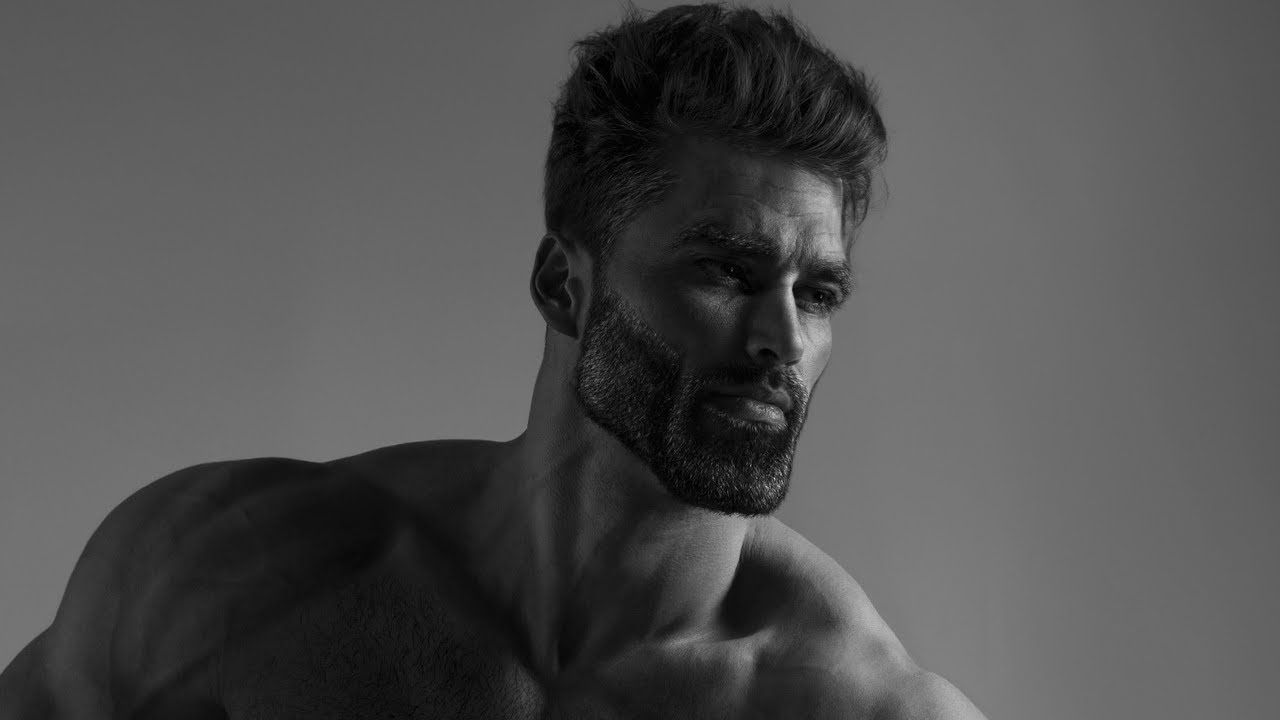 According to Know Your Meme, the name “GigaChad” refers to the ultimate version of “Chad Thundercock,” a slang term for an attractive, successful man.

In the very unofficial internet male hierarchy, GigaChad is the opposite of “lower ranking” archetypes such as beta males, soy boys, or simps.

How GigaChad Took the Internet by Storm

GigaChad got his name on October 17, 2017, when someone posted a picture of him on 4chan with the following description: “Behold, the Gigachad. The perfect human specimen destined to lead us against the reptilians.”

From here, pictures of GigaChad began circulating on various bodybuilding forums, incel communities, and subreddits where men and women alike ogled over his exquisite looks.

In February 2021, GigaChad saw a surge in popularity after his pictures were used in the “Average Fan vs. Average Enjoyer” meme format. One viral video featuring GigaChad and the song “Can You Feel My Heart” playing in the background has racked up over half a million views on YouTube alone.

By the summer of 2022, there were 600,000 monthly Google searches for Gigachad, making him one of the most popular memes in internet history. You can even shop a staggering amount of GigaChad merch on RedBubble.

But the question remains: Does GigaChad exist in real life, or only behind a screen?

Is Giga Chad a Real Person?

The short answer is no: the hyper-masculine guy from the GigaChad meme isn’t a real person. He’s a digitally altered version of a Russian fitness model created by an artist named Krista Sudmalis.

The evolution of GigaChad is complex, so let’s take it from the top.

In 2011, Russian photographer Krista Sudmalis launched an 18+ art project called SLEEK’N’TEARS “based on the idea of ICONic male beauty.” Since then, she has used several male models as photography subjects, one of which appears to be GigaChad.

In 2016, GigaChad launched his own Instagram account under the username “berlin.1969” and soon revealed his real name was Ernest Khalimov. Fans freaked out after years of assuming he was the product of someone’s imagination.

However, internet sleuths quickly found evidence that Khalimov didn’t exist and was actually a digitally altered image of another man. Some claim she Photoshopped her previous boyfriend, Artur Farad. Others say he’s a composite of multiple people.

Regardless, there are three pieces of evidence to suggest Ernest Khalimov, AKA Giga Chad, isn’t a real person:

If GigaChad made you feel insecure about not having eight-pack abs, take solace in the fact that “he” is a Russian art project—not a real dude.

Is It Game Over for GigaChad?

“GigaChad NFT Collection is not just a meme collection; it is an artwork by itself translating art photographer’s ideas, expressed in her own unique style,” says the description on OpenSea. “These photos are unique artworks, liked by a lot of people, artworks which have become a part of modern internet culture.”

Aside from the crypto venture, GigaChad’s berlin.1969 Instagram account recently passed the one-million follower mark, so you can bet your ass whoever’s running that thing has a license to print money.

It’s basically impossible to achieve a physique like GigaChad. But if this meme has inspired you to get swole AF, make sure you’re stocked up on DUDE Wipes for all the protein poops and gym sharts.