Walking down the deodorant aisle at the drugstore can be as intimidating as taking the SAT. Do you need 24-hour protection or 48-hour protection? Roll-on or spray deodorant? What’s the difference between deodorant and antiperspirant?

As if there wasn’t enough to consider, you’ve probably noticed some labels that say “aluminum free.” This makes you wonder: why would your deodorant stick be made of the same stuff as your Little League baseball bat?

Coming up, we’ll explain why some deodorants contain aluminum and why you’re (probably) better off without it.

Why Is There Aluminum In Deodorant?

Aluminum is a low-density metal known for its ability to resist corrosion. It’s used in aerospace, transportation, construction, and household products like foil. So, what’s it doing in deodorant?

For starters, aluminum doesn’t eliminate odor, per se. It stops sweat. Many antiperspirants contain aluminum salts, which are tiny rock crystals that clog the sweat glands in your underarms to prevent sweating—hence the word: anti-perspirant.

You probably fall victim to pit stains every summer and wouldn’t mind taming your sweat glands. So why is everybody up in arms (no pun intended) about aluminum in their deodorant?

Your body was built to sweat. It’s nature’s way of purging toxins and regulating your body temperature. However, plugging your pits with aluminum is like pressing pause on those natural processes.

A few studies in recent years have theorized that aluminum-based antiperspirants can interact with DNA, increasing the risk for breast cancer. In the 1960s, researchers were concerned that aluminum products could possibly cause Alzheimer’s disease. These theories spooked a lot of people, but there’s no solid evidence that aluminum or antiperspirants pose any significant threat to your health.

However, if you’re a dude with sensitive skin, aluminum deodorants can wreak havoc on your pits. For example, aluminum can cause contact dermatitis: a red, bumpy rash that can blister, peel, and flake.

Whether you want to avoid a trip to the dermatologist or just want a more natural deodorant, the solution is to go aluminum free.

What Are the Benefits of Aluminum Free Deodorant?

When you make the switch to aluminum free deodorant, you’re probably getting a deodorant that’s free from other sketchy chemicals as well. For example, many deodorants and antiperspirants contain parabens: preservative chemicals that can jack up your body's hormone levels. There’s also triclosan (used as a surgical scrub) and phthalates (used in insecticides).

Some people are so freaked out by these chemicals that they make homemade deodorant by mixing baking soda, cornstarch, and coconut oil and rub it on their armpits. We’re all for an affordable skincare routine, but there’s a reason that stuff is in the food aisle, not the grooming aisle.

With natural deodorant, however, you get the odor protection you need without a list of chemicals you can’t pronounce. No artificial colors, fragrances, paraben-free and aluminum free. Instead, you can bring stank to its knees with a blend of essential oils and natural ingredients like cedarwood, peppermint, tea tree oil, and sandalwood.

Bonus: DUDE natural deodorant is vegan and cruelty-free. Animals are friends, not for sourcing and testing hygiene products. 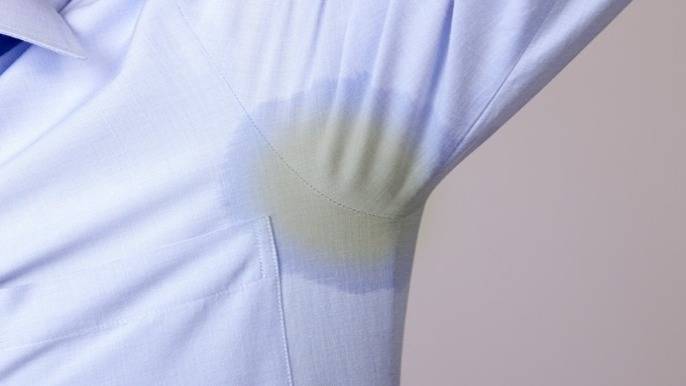 For decades, guys have blamed their sweaty underarms for the yellow pit stains that ruin their otherwise crispy white shirts. But what if we told you that you’ve been duped by deodorant brands?

Truth bomb: sweat isn’t yellow. You get ugly pit stains when the oily proteins from your sweat mix and mingle with the aluminum salts found in most antiperspirants. They cling to the fabric of the shirt, and once it goes through the hot dryer, the yellow stains get baked in. R.I.P. to your white tees.

If you want to keep your shirts stain-free, go aluminum free.

Natural ingredients are great, but what’s the point of a deodorant if it can’t keep your deadly odor at bay? If you’ve been using traditional deodorants and antiperspirants your whole life, it could take a few weeks to adjust to the natural stuff. We call this a “deodorant detox.”

When your pits are finally free from aluminum and other chemicals that prevent wetness, they kind of freak out. And by “freak out” we mean stink. During this acclimation period, your body will flush out toxins via sweat and produce an excess of odor-causing bacteria. The initial stinky phase can last between 1-2 weeks, but it’s important to push through.

By the third week of using natural deodorant your bacteria levels will subside. Translation: your pits won’t smell like a gym locker. Your underarm moisture levels will also normalize. By the fourth week, your body will be fully regulated and you’ll be feeling fresh 24/7 without any aluminum plugging up your pores.

You might hear people say, “Natural deodorant doesn’t work for me because I reek.” Don’t be afraid to enlighten them: Natural deodorant isn’t the problem—it’s your pits purging out years’ worth of gunk after slathering yourself with aluminum-laden antiperspirants.

After a brief deodorant detox, your pits can be stink-free and sweating normally, without any harsh ingredients like aluminum clogging up your system.