The 15 Craziest Bathrooms We've Ever Seen 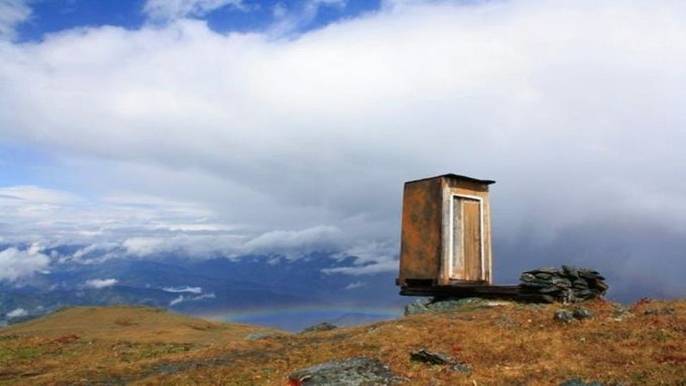 Some consider the throne to be a sacred place. A place where one can take care of business in peace, without the distraction of modern world. A daily ritual that clears the pipes both physically and mentally.

Other people don't take themselves or their poop so seriously, choosing instead to use a conventional bathroom design to innovate, create art, or prove the stupidity of the human race.

We are firmly in the latter group, so we put together a list of some of the craziest bathrooms we could find, showing you the some of the best (and worst) modern bathrooms one could conceivably desecrate with their basest bodily functions.

A heady DUDE from Indiana created an outhouse powered by jet fuel to go, "Where no toilet has gone before." It was seen shooting down a runway at Westfield International Air Show in Massachusetts. Seems like a decent way to fly through morning rush hour and take a morning dump at the same time. 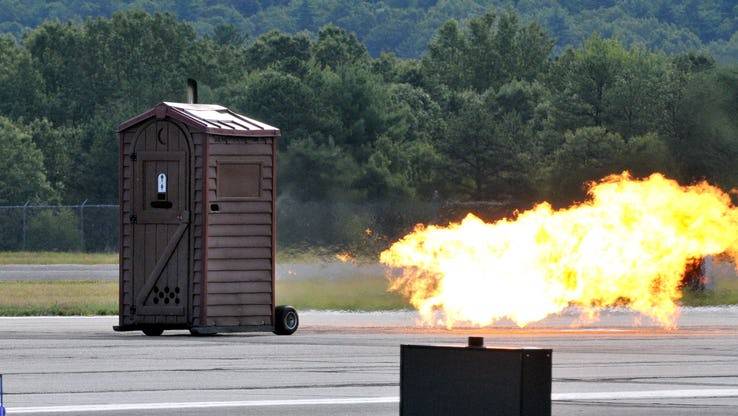 A toilet tricked out for the 90s working man. We could totally see Milton from Office Space spending his days here, though his stapler would clash with the color scheme. 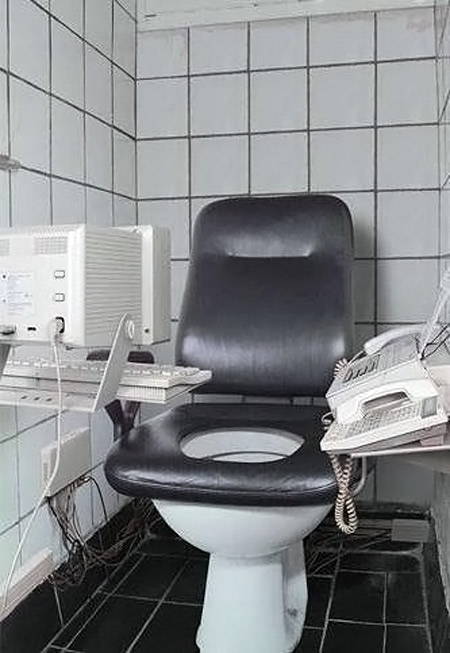 Yes, that's really what this toilet's designer, Milos Paripovic, called his creation. It's a designer john, made with the same materials as Apple products . If you're an Apple fanboy, don't go looking for how much this baby will set you back, it's not for sale. 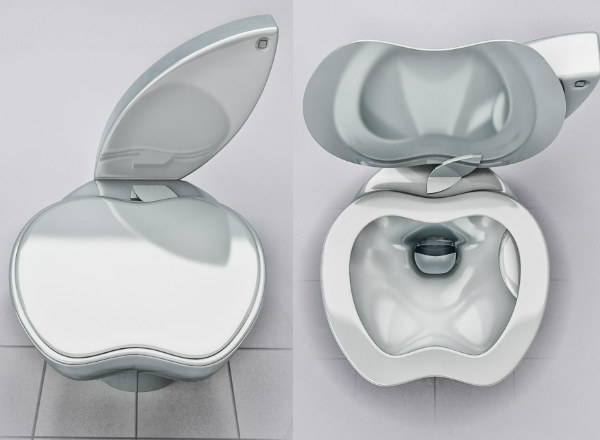 We have so many questions about the way this bathroom was rigged. Order too many toilets? Didn't want to spring for a urinal? Why did they go through with putting both toilets in? Then it hit us — what an epic opportunity for Battle Shits. 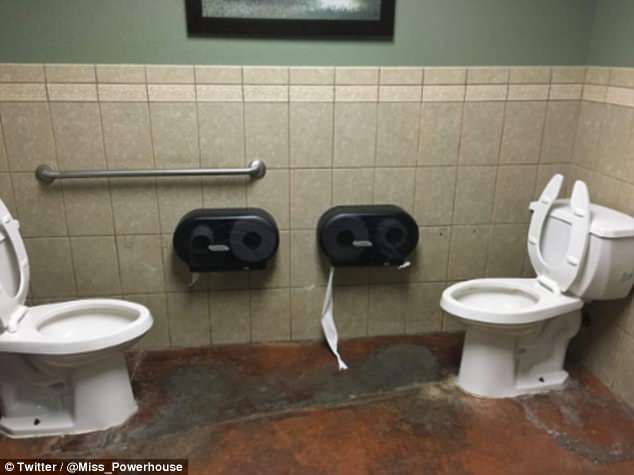 This seems like an outhouse only a certain gullible cartoon canine would get tricked into using. But if nature calls when you're at the end of the Earth, your options are likely limited. 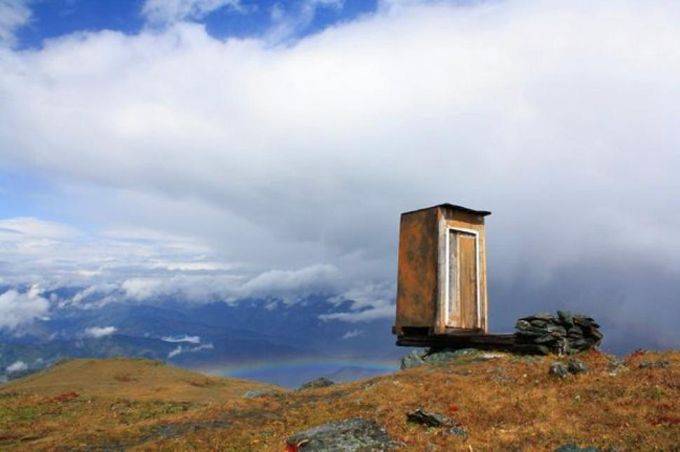 This takes the term "master bathroom" to a whole new level. This is a solid gold throne made by the Hang Fung Gold Technology Group in Hong Kong. The toilet itself is work $5 million dollars, while the entire bathroom will cost you a cool $28 million dollars. 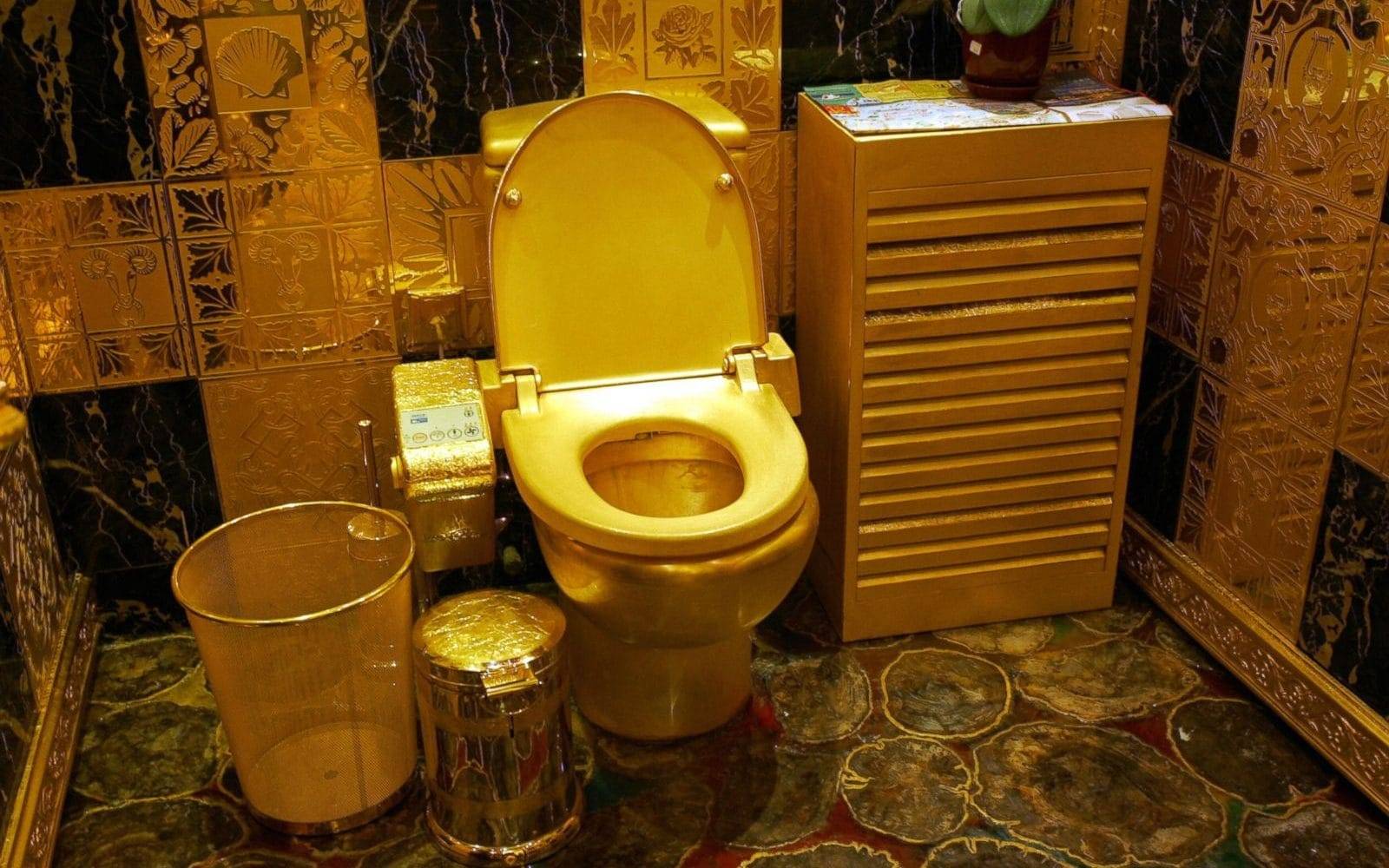 This toilet is an abomination, an outright disgrace. It looks like something a bored child would create if he was locked in a small bathroom. Not only is it not a functional toilet, it's flagrant insult to DUDES everywhere. 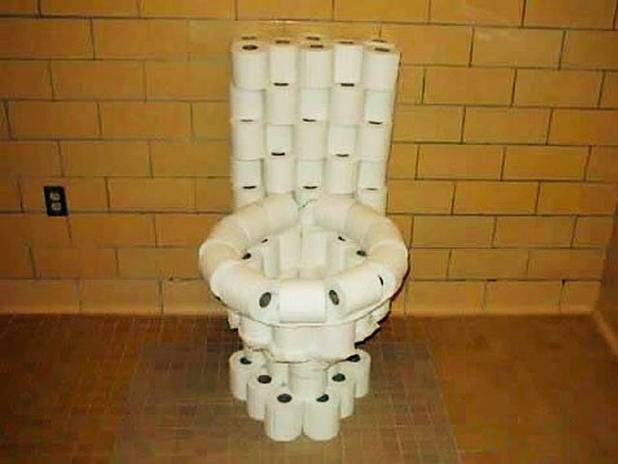 This toilet would be a wonderful gift for the friend who has a certain depraved fantasy. Or yourself if you're consumed with revenge fantasies. Just print out the faces of your enemies and tape them under the seat. 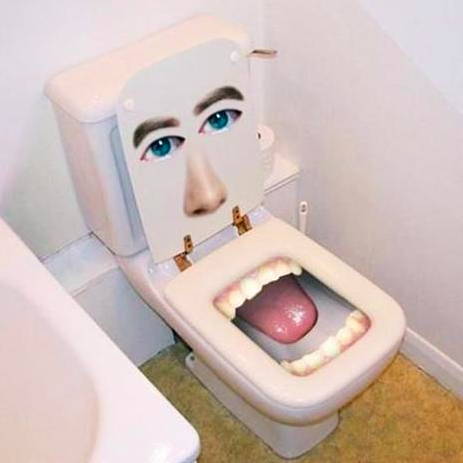 For those who look at ceramic with disdain, here is a classier model with a leather upgrade. This is one of the most impractical toilets on this list, as we're not sure how comfortable pooping while reclined is, and cleaning this baby would get gross fast. 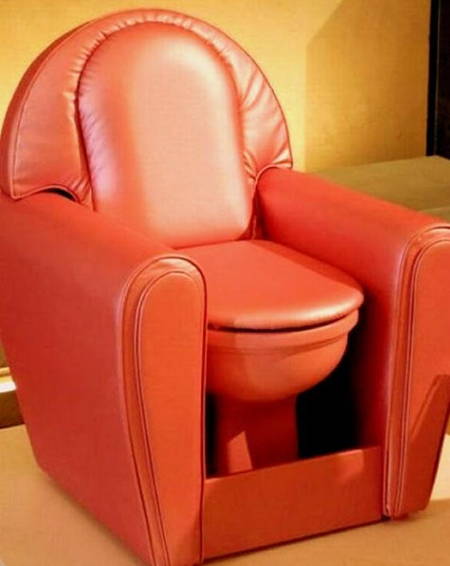 The only way this works is if there's a BYOC (Bring Your Own Controller) policy. Every gamer's dream is not having to interrupt play with essential bodily functions and this bathroom delivers. Who wouldn't want to go to the bathroom in full view of their friends while playing Fortnite? 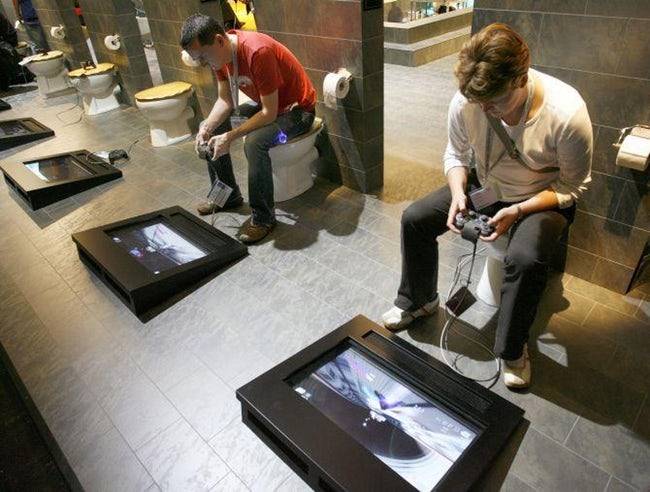 This is an art piece created by artist Monica Bonvicini, which was first shown outside the Tate Britain Museum in London. Bonvicini used one-way mirrors to create "Don't Miss a Sec" so you can see out when you're using the toilet, but no one can see in. In case you don't feel exposed enough on the toilet, this exhibit's mind trick is for you. 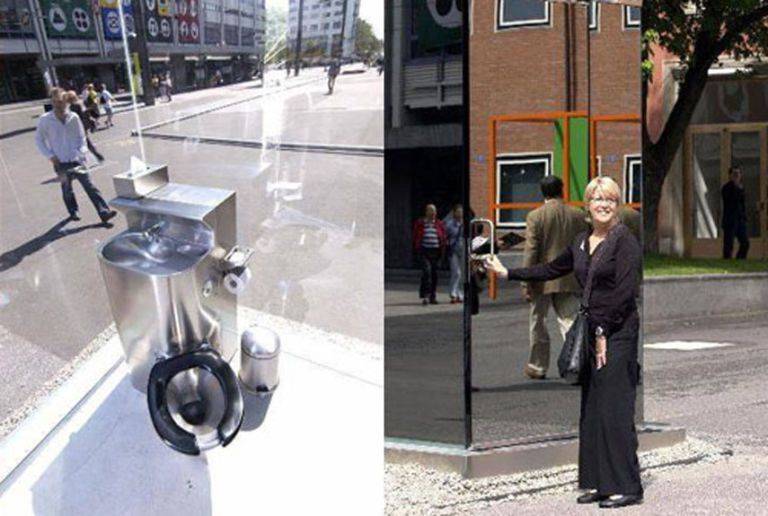 12. The world's coldest (and loneliest) bathroom

The urinal below was installed in Antarctica, mere yards from the South Pole. Chris Curtis, who took this picture, said this bathroom, "Marks an elusive destination and goal that was not able to even be reached until the early 1900s." Peeing your pants for warmth is probably pretty tempting if you're near the South Pole, so good on the brave souls who installed this urinal. 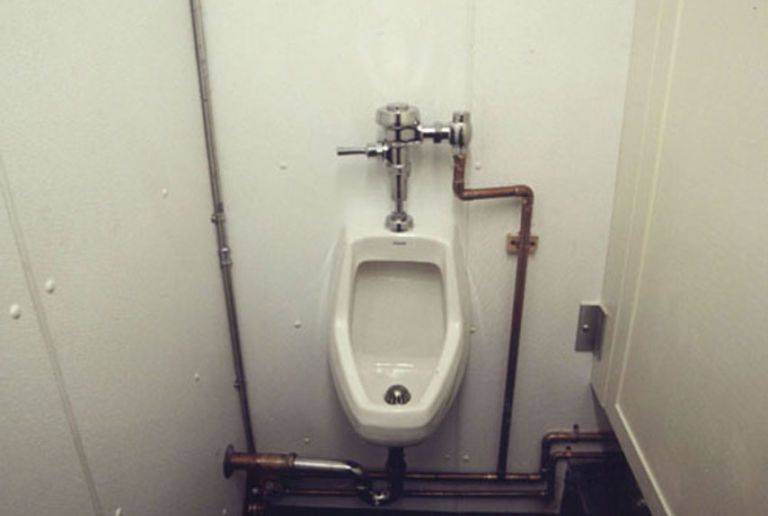 This underwater restroom (women only) at the Mumin Papa Cafe in Japan cost $270,000. It was designed to make you feel like you're going in the ocean, which you can always do for free by going for a swim. 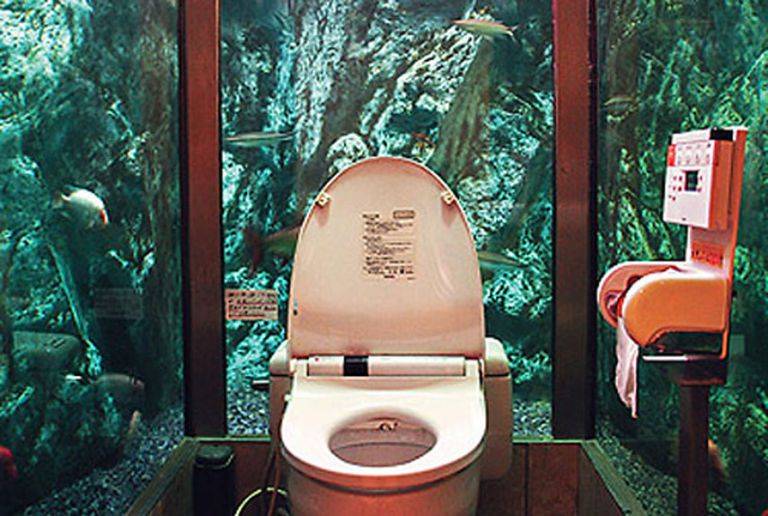 14. the safest place to poop

This is a 15-ton public restroom in Beijing that was built to withstand bombs and gunshots. With a price tag of $100,000 it's definitely not most cost-efficient way to build public bathrooms, not to mention the fact that public bathrooms generally aren't high priority targets for terrorists. 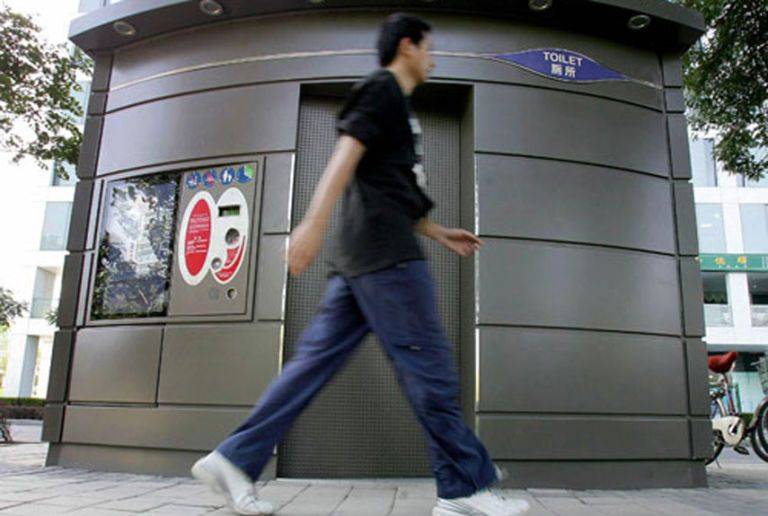 This diamond encrusted toilet is valued at $100,000 and has more than 72,000 pieces of Swarovski cut crystal on it. It was made by a Japanese fixtures company to attract more walk-in traffic at their store. No word on if the stunt worked, or if any customers defecated in it, mistakenly thinking it was fully functional. 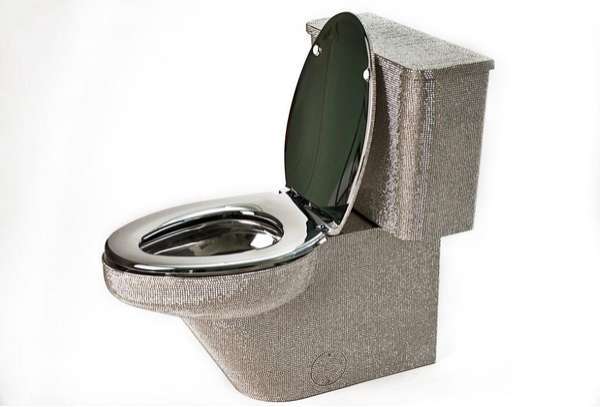 As you can see, a bathroom can be more than white walls, floor tiles, and countertops from Home Depot. You need a modern master bathroom with a vibe that's all you. Just because everyone else's commode looks the same, doesn't mean yours has to.

Oh, and don't stock your bathroom with any old toilet paper. Grab a pack of DUDE Wipes to keep it fresh. 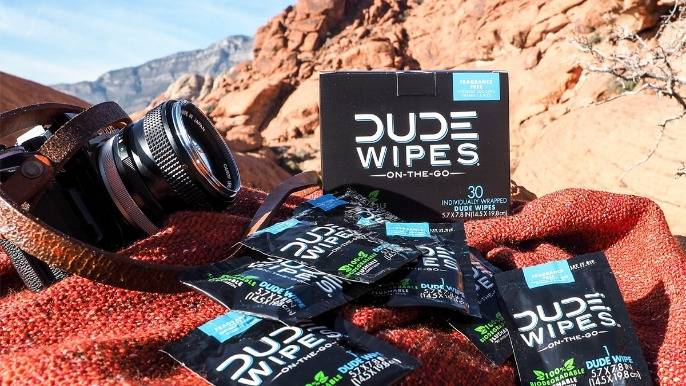